“The sand is always there again the next day, it’s not sand mining that’s causing this erosion.” Ebenezer Hukportsi, 25, tells me. It’s difficult to tell someone to stop doing an activity that provides them their livelihood and feeds their children, for what appear to them to be abstract environmental reasons. But that is what the Ghanaian government and many environmental activists are trying to do.

Sand mining has been long practiced along the coasts of Ghana, and has been identified as a major man made cause of the rapid coastal erosion afflicting the country. Efforts have been made through campaigns against the activity, to make it socially unacceptable, but many like Ebenezer are still skeptical as to its true impact.

Sand mining has now been made illegal, which has helped to stop the large scale extractions with machinery and tip trucks. However it is acknowledged that smaller scale mining still occurs, mainly at night, with the sand sold in bags to make cement blocks for construction of homes. “The sand belongs to nobody but God, why shouldn’t I be able to take some to sell to make money for my family?” Is Ebenezer’s justification. Given the lack of economic alternatives for people in the area it is hard to argue with him.

It is a similar story with the harvesting of mangrove trees around the village of Dzita, a village that has lost hundreds of metres of protective beach and recently lost part of its primary school during a tidal surge that inundated the town.

The mangrove trees are used as firewood for cooking, but the harvesting of mangroves weakens the coastline. This is because the dense root systems help to trap sediments and stabilise the sandy soil, without the mangrove forests erosion occurs much more quickly during storms.

Many local people, especially women, rely on selling mangrove wood to make a living. When I asked some vendors selling mangrove wood in Dzita if they knew of the impact of harvesting, they all replied that they had no idea it contributed to the erosion of the coast. “We have been doing this for years, we can’t afford to buy gas to cook with and we can also make some money by selling the wood. How can taking this wood be making the coast disappear?”, says Evelyn Nutakor, 58.

Again, without adequate education on the impacts of mangrove harvesting and viable economic alternatives in the area it is impossible to blame locals for the environmental impacts their activities cause, people will do what they can to survive.

Farmers around Dzita are also impacted by the encroaching sea. I spoke to one farmer, Joseph 46, who lost his Okra crops when the sea washed far inland during another tidal surge earlier this year, destroying his small farm. “I’m trying again. I have nowhere else to go to plant my crops, it has been hard this year. I pray to God that the sea stays away long enough to get a good harvest. I have no idea when they are coming to build a sea defense here, I hope soon”. Official communications from the government have stated Dzita as being a beneficiary of a new sea defence project built further up the coast, but on visiting it is clear that it hasn’t reached here yet.

Despite government pronouncements about sand mining being the major culprit for Ghana’s fast eroding coastline, it is in fact much more complicated than that. A combination of natural causes, including sea level rises and stronger and more frequent storms, as well as more direct manmade causes such as sand mining, construction along the coast and mangrove harvesting all play a part.

However, these factors are less significant than the government’s poorly managed coastal strategy that has implemented reactive and environmentally unfriendly hard engineering projects over the years. By far the biggest contributor to coastal erosion in the eastern region is the Akosombo dam, built across the Volta river in the 1960’s and thus creating the world’s largest manmade lake, Lake Volta.

There is a natural tidal flow in this part of the Atlantic, coming from the south-west and pushing sand continuously east along the coast of Ghana. The mighty Volta river used to replenish the wide, protective beaches with sediment brought downriver from the heart of the country, over 70 million tons a year constantly replacing sand pushed further eastwards toward Togo and Benin. The construction of the dam stopped this vital source of beach renewal, reducing sediment flow to only 7 million tons, not enough to provide beaches an adequate volume of sand.

This has lead directly to the rapid increase in erosion rates, particularly in the regions directly to the east of the river mouth, the area I am currently investigating. To mitigate the disastrous consequences of the dam, sea defence systems such as groynes, long barriers out to sea that trap the eastward flow, have been implemented. This is fine for the areas where they are built such as Keta, where beaches are now starting to slowly grow and replenish themselves.

But further East on the other side of the groynes the problem is drastically worsened as beaches are further starved, with erosion rates going through the roof. This lack of foresight for consequences is damaging and very expensive, as more and more communities demand urgent sea defence and the problem is passed along the coast.

So we come to Blekusu, East of the Keta sea defence, where erosion rates have indeed increased rapidly. Local fisherman Simon Koti, 72, is angry but is resigned to his fate. “I don’t know how long it will be until the sea takes my house, 6 months, perhaps 1 year if they don’t build a defence here. But whatever happens I will not move from Blekusu, I am an old man and I will die here.”

There are huge piles of rocks ready to go on two sites for sea barriers to protect the village, but no sign of workers or the machinery to set them in place out into the sea. “They have been there for along time now, nobody knows when they will come to finish” laments Simon. He believes that the issue is being used by the political parties coming up to the elections next month. “We know building the defence is expensive, and the government has promised to build it if we vote for them” he said. “But the village has decided that we are going to vote for anyone until we see proof that they are coming to start the project very soon”.

For many villagers it is already too late, with houses crumbling into the sea as we speak, leaving them nowhere to go but live in makeshift accommodation such as tents or staying with friends. With the coast losing 8 to 10 metres a year in these parts, and the sandy strip the village is located on now only around 100m wide between the sea and the Keta lagoon, time is running out for the people of Blekusu. There is talk of reclaiming land from the shallow lagoon and eventually relocating residents there. But again at this point it is just talk, there is little hard evidence of planned works to pump water out of the lagoon for new lands for Blekusu residents to claim.

Economically villages are feeling the pinch too, as fishing is the only game in town. “There is only fish here. No land to grow crops, there are a few shops and a couple of guys drive taxis, but we all rely on fish” says another fisherman, Yao Gabara, 32. The rapidly shrinking beach has meant that it’s now impossible to partake in traditional net fishing from the shore, where several men haul the long net ropes from wide sandy beaches. “There’s no space for net fishing anymore, we would be back in our houses! Only the guys with boats can fish now, and we don’t have many in the village. The only other option is finding the small fish in the lagoon. The erosion is bad for our economy here too”.

Even those with boats are experiencing problems, as the erosion has led to a steep drop from the beach down to the water, meaning the natural landing sites for their boats are compromised. It takes many men to drag a boat up onto shore now which means bigger crews, and less profit for the boat owner.

One business that seemed to be doing well is the local bar, or ‘spot’ as they are called here. Stocked with dubious looking bottles of homemade gin and tepid local beer, I stopped by around 5pm for a chat with the barlady. “We sell a lot of gin here, I think people are drinking more lately because they are afraid and have no power over their future”. The loss of livelihood, subsequent unemployment and increased alcohol consumption is creating further tensions and social problems in a village that is already under siege from the sea.

Walking around Blekusu among the ruins of houses half washed away I noticed many new cement blocks, waiting to be used for rebuilding. Simon admitted to me that they were made with sand that had been mined from the beach. The villagers here are trapped in a damaging cycle, contributing further to erosion in order to rebuild their homes that have been destroyed by, erosion.

Yes, sand mining is an issue that should be addressed. But rather than simply portraying vulnerable people as the cause of their own problems through actions such as sand mining, perhaps it’s time the government here created a sustainable and environmentally sound strategy to protect Ghana’s precious coastline, home to more than a quarter of its population. Sadly I fear that it may come too late for Simon and the villagers of Blekusu, at the mercy of the sea and of political bargaining, with no help on the way.

Per contattarci, scrivi a info@vociglobali.it 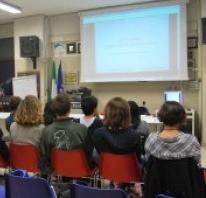